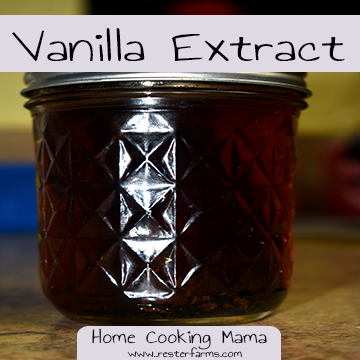 Today’s adventure on my road to Control is homemade vanilla extract. 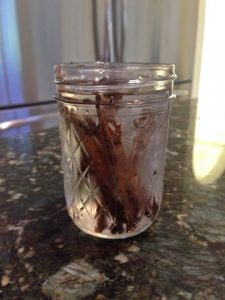 Somedays I feel really dumb. About a year ago I was reading a recipe book and there was a recipe for vanilla extract. And the thought popped into my head ‘you can make that yourself?’ Like I said it was a dumb moment because I felt stupid for thinking that something like vanilla extract is a mystical item that comes from a secret place beyond the reach of us normal human beings.

My adventures with vanilla extract began when I really started baking although I’m ashamed to say I bought that generic clear imitation vanilla extract. I don’t even want to think about what sort of toxic chemical experiment that is.

My husband had been in Mexico years ago and brought my mother in law back some real vanilla extract from there. And we’re not talking some little tiny 2oz bottle this was wine bottle size. My mother in law makes the best desserts!!! Anyhow this was before I had met my husband but when one of our friends was heading to Peru she asked if he would bring back some vanilla. It was quite a funny moment. I was handed this large bottle, in church, that looked like I had just left the liquor store, of course, there was no ‘proper’ label and if you open it really smelt like I had hit the liquor store! ‘No Pastor I know I’m from Ireland but I haven’t fallen off the wagon!!!’ Promptly followed by ‘my mother in law gave it to me!’

Anyhow, I used this wonderful real stuff and instantly noticed the difference. Goodbye, imitation!!! Sadly that bottle ran out as all good things must come to an end. If you are like me and a vanilla extract purest you have probably noticed that it’s getting harder to find, costing more and the bottles keep getting smaller.

So now to the Control of my food issue. The current bottle I’m using is from Target, the Archers farm brand. It cost me $6.99 for a 2 fl oz bottle. Look carefully at the label, water, alcohol, extractives of Madagascar bourbon vanilla beans. 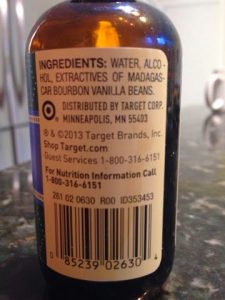 Nowhere in my research did I see water added to the process!!! Plus what type of alcohol did they use? Making your own is getting control of the ingredients. My label will say vodka and vanilla beans.

So I hit the internet and read probably every blog posting under the sun on the subject and researched beans. There is a difference in the quality of beans, grade a and grade b. So here’s the low down. Grade a is the gourmet grade and grade b is the extract blend. It’s simply a case of moisture content. When you are cooking with something that requires a vanilla bean you want to use grade a because of the higher moisture content. If you are making extract you want grade b as it is cured differently leading to a more intense flavor. Got it?

So where do you get beans! Obviously, the grocery store is not the answer and unless a trip to Madagascar is possible, to the internet we go. I ordered from the Vanilla Bean Company on Amazon because I love Amazon and have prime. The same company is also on eBay. The beans arrived well packaged and I love the instant smell of vanilla when I opened the envelope. 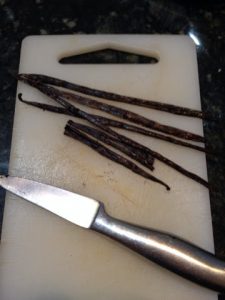 Now there are a lot of beans out there from different locations and like all things grown, where they grow has an impact on taste. I’m sure it takes a true vanilla connoisseur to taste the subtle differences but as Madagascar beans seem to the popular one for extract, that’s what I went with.

Next, we need alcohol. I was under the impression I needed to use bourbon but after much research, the jury has decided that vodka is best. I was also under the impression that the lovely dark brown color came from the bourbon but actually as it matures it darkens the alcohol! Magic beans!!!! Ok, it’s nice to keep a little mystery to the process, although the homeschool mama in me will have to do a scientific study on that one with my boys one day! You can use bourbon and I’m sure at some stage I will experiment and even try rum so see what the difference is! I have chosen vodka because I have a bottle in my house. It’s Smirnoff and everyone says to use the cheapest you can find but as a former vodka drinker, I’m going to go with what I know because cheaper can taste so nasty!!! And huge FYI don’t do flavored vodka just the raw stuff. Although that might be another interesting experiment!

So with my canning experiments, I have mason jars everywhere so that was my choice of maturing vessel. Please don’t use plastic. Although BPA has been taken out of so much I’m sure they have found an equally toxic chemical to replace it with that we just don’t know the risks of. The plastic can leach into the vanilla extract and there’s no telling what it will do. Let’s boost the glass making industry because it’s safer for taste and our health. The internet has a ton of gorgeous bottles with swing caps to pick from. My next batch I think of will splurge and get a pretty bottle! Whatever you use just make sure it seals.

So now for the process. Obviously, this is going to take some time to see the finished product and I will do an updated post when I get there. So why not order some beans, grab the vodka and share your vanilla extract progress with me, there still is a little magic to this one so let’s enjoy it!! 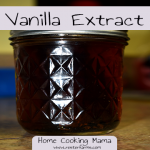 Some of the links on this page are affiliate links, meaning, at no additional cost to you, I will earn a commission if you click through and make a purchase. Please be assured I will only ever recommend products and services that I have personally tried and used.